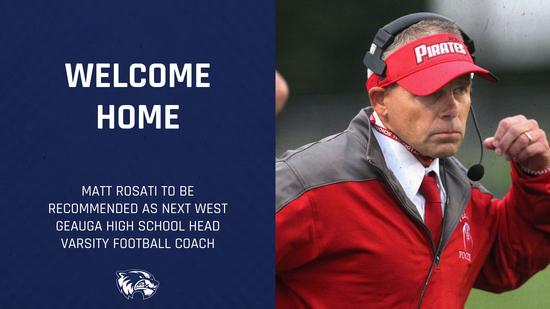 Matt Rosati will be presented to the West Geauga Board of Education for approval to become West Geauga High School’s head varsity football coach at the first board meeting of 2022.

Rosati returns to the Wolverines where he remains the winningest coach in program history after posting a 69-46 record from 1996 through 2007. While at the helm of West Geauga football, Rosati led the team to its first playoff season and first playoff victory. In total, he made four playoff appearances, won two CVC Championships, and had one undefeated season. For his efforts, he was named the CVC Coach of the Year on five different occasions.

“I am extremely excited for the opportunity to lead the West Geauga Wolverines once again,” said Rosati.

After departing from West Geauga in 2008, Rosati was named the head coach at Perry High School where he led the Pirates for 14 seasons. During that span, he posted a 111- 44 overall record and led Perry to six CVC Championships, four Regional Finals, and a State Final Four. His teams qualified for the playoffs in seven consecutive seasons. Perry posted three undefeated seasons under Rosati, and he was named Coach of the Year seven times.

“Coach Rosati’s football resume speaks for itself. Not only is he an outstanding coach, but he is a well-respected educator who will strive to provide our student-athletes with a positive experience. His knowledge and passion to bring the history back to West Geauga was very evident during the interview process”, said Athletic Director Brandon Stewart.

The Wolverines finished 7-4 last season and qualified for the OHSAA Playoffs for the second season in a row before falling to Streetsboro 56-42 in the opening round.


No highlights for this season yet.